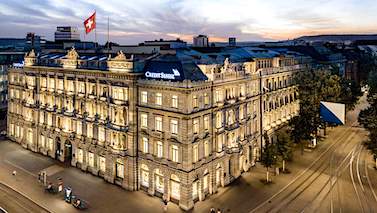 Credit Suisse Group has announced the appointments of Dixit Joshi as chief financial officer and Francesca McDonagh as group chief operating officer, with both joining the executive board.

These appointments, and others, comprise the first big leadership reshuffle under new CEO Ulrich Ulrich Körner.

All three will report directly to Körner, the bank’s fourth CEO since 2015.

Credit Suisse is recovering from the financial and reputational hits it suffered from the blow-up of Archegos Capital Management and Greensill Capital.

The group’s losses have totaled more than $4 billion in the past three quarters.

Francesco De Ferrari, CEO of the group’s wealth management division, has been appointed CEO of the Europe, Middle East and Africa (EMEA) region after serving in this role on an ad interim basis since January 2022.

Joshi rejoins Credit Suisse from Deutsche Bank, taking up the role of CFO on October 1, 2022. He will replace David Mathers who decided to step down after more than 11 years in his role.

For the past five years, Joshi served as group treasurer at Deutsche Bank.

Francesca McDonagh, who was previously announced as CEO of the EMEA region, is appointed group chief operating officer, starting on September 19, 2022.

“This new role will support the group CEO in the steering and strategic development of the group including operational and cost transformation,” said Credit Suisse.

“She will also lead the enterprise architecture development, including focusing on organizational design and bank-wide efficiencies.”

McDonagh most recently served as Group CEO at the Bank of Ireland after holding several senior management roles at HSBC Group.

In addition, Michael Bonacker is appointed group head of transformation, starting his new role on September 1, 2022, and reporting to Francesca McDonagh once she joins the company.

CEO Körner said: “I would like to welcome Dixit and Francesca to Credit Suisse, while congratulating Michael and Michael on taking their respective new roles.

“They all join with extensive professional experience and a profound knowledge of the financial services industry, as we accelerate our efforts to make Credit Suisse a stronger, simpler and more efficient group with more sustainable returns.

“Dixit has an impressive turnaround track-record, with a broad experience across a range of investment-banking businesses, which will be invaluable on our journey in transforming the investment bank into a highly competitive banking and more sustainable markets business that complements wealth management and the Swiss Bank.

“I would like to thank Francesco for taking on the role of CEO of the EMEA region on top of his responsibilities as CEO of the wealth management division.

“At the same time, I would like to thank David for his many years of service and his continued commitment to Credit Suisse, helping ensure a smooth transition period.”