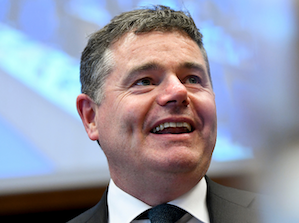 Eurogroup president Paschal Donohoe has said the eurozone has the “ability to navigate through the changes that are taking place” amid widespread market volatility and denied that the currency union is facing a sovereign debt crisis similar to that of a decade ago.

In an interview with London newspaper The Financial Times, Donohoe said the euro area now had “stronger architecture” and “deeper foundations for our common currency.”

Donohoe, who is Ireland’s finance minister, said current circumstances were “completely different from the kind of crisis environment we were in” when the eurozone suffered a sovereign debt sell-off in the early 2010s.

“We are all confident about our ability to navigate through the changes that are taking place,” said Donohoe.

He highlighted employment growth and support from the EU’s €800 billion NextGenerationEU programme, which he said would sustain the region’s economic expansion.

“The starting positions for member states in terms of their debt and deficit levels is now very, very different to where we were before Covid hit us,” said Donohoe.

“We will continue to need to have plans that reduce borrowing in a careful way. The plans to do it will have to be credible. They will have to reflect the fact that we are in an inflationary environment.”

“This is going to be a fine balance.”