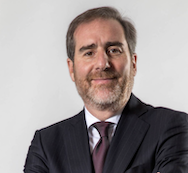 Grisi will succeed José Antonio Álvarez, who has been with Santander since 2002 and was appointed chief financial officer in 2004 then CEO in January 2015.

Following the transition, Álvarez will remain on the board as non-executive vice chair.

“He brings decades of experience and a deep understanding of our markets and business, and a proven ability to lead in a collaborative way and create value for both customers and shareholders.

“His track record as CEO of Santander Mexico and head of North America speaks for itself and illustrates why we believe he is the right person to lead the bank in the next phase of our transformation and growth.”

Grisi joined Santander in 2015 as CEO of Santander Mexico. The bank said that since then, he has completed a transformation of the bank’s business in the country, achieving an adjusted return on tangible equity of 31% as at March 31, 2022, growing the number of active customers by nearly 50% to close to 10 million while establishing leading market position in SMEs, mid-market corporates, mortgages and project finance.

In 2019, he was appointed head of the Santander group’s North America region, covering both Mexico and the US.

In 2021, the US achieved a record year for profitability for Santander, generating $2.7 billion compared to $648 million in 2018, making the largest contribution to profit of any market in the group.

“Furthermore, the connectivity within the region has improved significantly, leveraging cross boarder opportunities for revenue generation, while encouraging greater efficiency across the markets, reflecting the bank’s goal to build ‘One Santander’,” said the bank.

“As a result, the region’s profit has nearly doubled since 2019.”

Before joining Santander, Grisi spent 18 years at Credit Suisse, where he held a range of senior positions, including head of investment banking for Mexico, Central America, and the Caribbean, then President & CEO of Credit Suisse Mexico.

Grisi said: “I firmly believe that Santander’s scale, diversification, and customer focus create opportunities for growth that are difficult for others to replicate.

“I am excited to get to work and have no doubt that we have the strategy, model and above all, the team, to create value for all our stakeholders and fulfil our potential.”