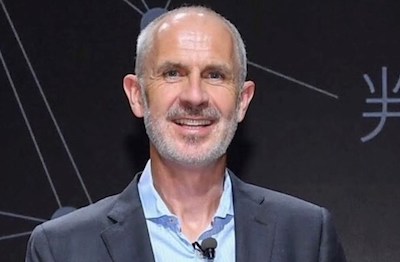 Scottish businessman and investor Jim Rowan is to join Volvo Cars on March 21, 2022, as CEO & President, the company said.

Rowan, 56, is currently CEO of California-based Ember Technologies and was previously CEO of the Dyson Group and COO of BlackBerry.

Rowan is also currently a senior advisor to the global investment firm KKR.

Rowan, who graduated from Glasgow Caledonian University, will succeed Håkan Samuelsson, 70, who joined Volvo Cars as a board member in 2010 and has held the role of CEO & President since October 2012.

Volvo Cars chairman Eric Li said: “Volvo Cars is going through a rapid transformation of digitalization which is why we wanted to bring in someone with global CEO experience from outside the automotive industry.

“Jim is the right person to accelerate Volvo Cars into the future — enabling it to become the fastest transformer in its field and a fully electric company with millions of direct consumer relationships.

“I would like to take this opportunity to sincerely thank Håkan Samuelsson for his commitment and determination over the past ten years at Volvo Cars.

“Håkan has, together with his management team, created a renewed and strong product line, re-established Volvo as a premium brand that is well placed for the future, and enabled the successful listing of Volvo Cars.”

Volvo Cars completed one of Europe’s biggest IPOs of the year in October 2021 when it listed on Nasdaq Stockholm.

Volvo Cars has been owned by China’s Zhejiang Geely Holding since 2010.

“This change follows a thorough and diligent search process to secure the continued strong leadership of Volvo Cars with a CEO who has a strong background in software, digital transformation and innovative consumer products, and the timing is in-line with the previously communicated extension of Håkan Samuelsson’s contract that comes to an end in 2022,” said Volvo Cars.

“Jim brings with him over three decades of global experience in the consumer and technology sectors, delivering strong growth and profitability through transformation strategies and customer engagement.

“He has also worked extensively with digitalization, disruption, innovation, engineering and supply chains, which will be valuable for the future of Volvo Cars to realise its strategic ambitions.

“He has worked with Ember as an investor, board member and its CEO since February 2021.

“He served as CEO of the Dyson Group between 2017-2020 and as COO from 2012-2017, during which time he accelerated the company’s e-commerce strategy, launched new innovative products, and grew its market share worldwide.

“Prior to Dyson, he was the COO of BlackBerry.

“He is currently a senior advisor to the global investment firm KKR and a member of the shareholders’ committee of Henkel AG, a German technology and consumer goods company, which operates worldwide.”

Rowan said: “I am delighted to join Volvo Cars at such an exciting time for the company and at such a transformational time for both the industry and consumers.

“The strong track record of Volvo Cars across innovation, safety and quality, coupled with world-class talent and inspiring sustainability and technology capabilities, places it in the driver’s seat for the road ahead.”