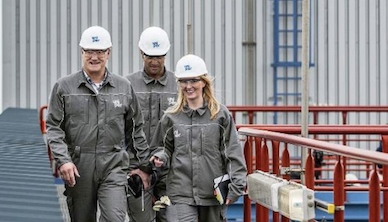 German energy giant Uniper has secured credit facilities worth up to €10 billion from its Finland-based majority shareholder Fortum and German state bank KfW in a move to cope with margin calls amid unprecedented prices and volatility in European energy markets.

Gas prices in Europe have soared to unprecedented levels amid slowing gas supplies from Russia. Uniper depends on gas from Russia to supply its customers.

Finland’s state-owned Fortum, which owns more than 76% of Düsseldorf-based Uniper, said it has provided Uniper with intra-group financing in the format of a credit facility agreement of up to €8 billion “on arm’s length terms.”

Fortum also said Uniper has agreed with German state-owned bank KfW a short term revolving credit facility of up to €2 billion. The facility has not been used so far.

“Fortum’s subsidiary Uniper is hedging its asset positions with forward commodity sales, which are often subject to margining payments.

“When commodity prices increase, the mark-to-market value of those deals decline, which triggers additional margining payments for Uniper.

“When the underlying gas and power positions go into delivery or commodity prices decline, the margining payments are returned to Uniper.

“During 2021, the European gas prices have risen up to 1,000% and have, together with power prices, been at unprecedented levels in December.

“Under these market conditions, Uniper’s focus remains on securing reliable deliveries to its customers and honouring its commitments.”

“The amount of those temporary margining payments depends on the overall commodity price levels.

“Drawing of the existing revolving credit facility with Uniper’s core banks: Under the contractually committed credit facilities, Uniper has drawn down the full volume of EUR 1.8 billion …

“The credit facility agreement was concluded on 22 December 2021 at arm’s length conditions.

“The Supervisory Board of Uniper had approved the conclusion of the credit facility agreement in advance.

“The facility has partly been used. Fortum is Uniper’s major shareholder owning more than 76% of the shares in Uniper …

“Agreement with KfW on a revolving credit facility: On 4 January 2022 Uniper agreed on a credit facility of up to EUR 2 billion with the German state-owned KfW-bank, which expires on 30 April 2022.

“The credit facility has not been utilized so far; it rather serves as a back-up facility in case of further extreme commodity market developments …

“However, at the same time, higher commodity prices increase the value of Uniper’s underlying gas and power assets.

“Uniper plays a central role in ensuring security of supply in the European energy sector.

“Accordingly, its products and services are of particularly high demand in the current market environment.”