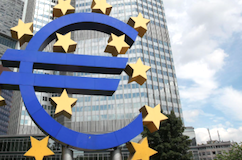 The International Monetary Fund said in a report on Thursday that the euro zone economy is facing rising risks from trade tensions, Brexit and Italy — as it backed the European Central Bank’s (ECB) plans for fresh stimulus.

The report, the last by the IMF on the euro zone before its managing director Christine Lagarde leaves to head up the ECB, the IMF said the ECB’s plans to keep monetary policy accommodative were “vital” as the bloc faces “a prolonged period” of anemic growth and inflation.

The IMF said: “After a sharp slowdown starting in 2018, euro area growth is expected to recover over the course of 2019.

“However, mounting downside risks from global trade tensions, a no-deal Brexit, and market concerns about countries with high public debt emphasize the precarious nature of the forecast.

“Even in the absence of a major shock, there is a danger that the area could enter a prolonged period of anemic growth and inflation.

“Policies should focus on supporting growth while also reducing vulnerabilities.”

The IMF’s forecasts were slightly better than those released on Wednesday by the European Commission which saw euro zone growth at 1.2% this year and 1.4% in 2020.

The report added: “There are significant downside risks to the outlook.

“Prolonged or elevated trade tensions could undermine exports and investment.

“The risk of a no-deal Brexit remains high.

“If realized, this could cause short-term disruptions for the euro area, as well as longer-term output losses.