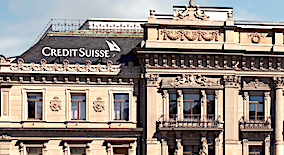 Switzerland’s Credit Suisse has warned that its first quarter results could suffer a material impact after the bank started exiting positions after a US hedge fund defaulted on margin calls.

Japan’s largest investment bank Nomura Holdings also warned that “an event occurred that could subject one of its US subsidiaries to a significant loss arising from transactions with a US client.”

Market investors are now on edge about which other banks might be exposed to the hedge fund margin calls default.

Credit Suisse said in a “trading update: “A significant US-based hedge fund defaulted on margin calls made last week by Credit Suisse and certain other banks.

“Following the failure of the fund to meet these margin commitments, Credit Suisse and a number of other banks are in the process of exiting these positions.

“While at this time it is premature to quantify the exact size of the loss resulting from this exit, it could be highly significant and material to our first quarter results, notwithstanding the positive trends announced in our trading statement earlier this month.

“We intend to provide an update on this matter in due course.”

Nomura Holdings said: “Nomura is currently evaluating the extent of the possible loss and the impact it could have on its consolidated financial results.

“The estimated amount of the claim against the client is approximately $2 billion based on market prices as of March 26.

“This estimate is subject to change depending on unwinding of the transactions and fluctuations in market prices.

“Nomura will continue to take the appropriate steps to address this issue and make a further disclosure once the impact of the potential loss has been determined.”

Archegos spokesperson Karen Kessler told Bloomberg late on Monday: “This is a challenging time for the family office of Archegos Capital Management, our partners and employees.

“All plans are being discussed as Mr. Hwang and the team determine the best path forward.”