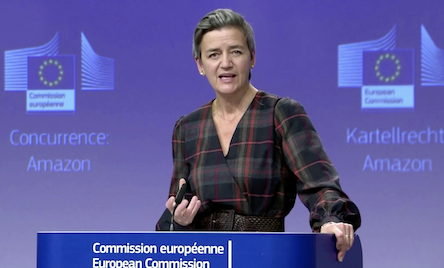 The EU accused Amazon of relying on business data of the independent sellers who sell on its marketplace for the benefit of Amazon’s own retail business.

“The European Commission has informed Amazon of its preliminary view that it has breached EU antitrust rules by distorting competition in online retail markets,” said the Commission in a statement.

“The Commission takes issue with Amazon systematically relying on non-public business data of independent sellers who sell on its marketplace, to the benefit of Amazon’s own retail business, which directly competes with those third party sellers.

“The Commission also opened a second formal antitrust investigation into the possible preferential treatment of Amazon’s own retail offers and those of marketplace sellers that use Amazon’s logistics and delivery services.”

Amazon told Reuters: “Amazon represents less than 1% of the global retail market, and there are larger retailers in every country in which we operate.”

A final EC decision on Amazon could come in 2021.

The company faces being fined up to 10% of its turnover if found guilty of breaching EC antitrust rules.

It can avoid a big fine and an EC finding of wrongdoing by offering concessions.

EC executive vice-president Margrethe Vestager, in charge of competition policy, said: “We must ensure that dual role platforms with market power, such as Amazon, do not distort competition.

“Data on the activity of third party sellers should not be used to the benefit of Amazon when it acts as a competitor to these sellers.

“The conditions of competition on the Amazon platform must also be fair.

“Its rules should not artificially favour Amazon’s own retail offers or advantage the offers of retailers using Amazon’s logistics and delivery services.

“With e-commerce booming, and Amazon being the leading e-commerce platform, a fair and undistorted access to consumers online is important for all sellers.”