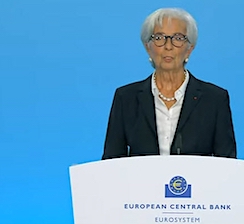 The European Central Bank increased interest rates by a half-point and ECB President Christine Lagarde told markets to get ready for a series of similar moves in the fight against the worst inflation in the history of the euro.

After successive hikes of 75 basis points, the ECB lifted the deposit rate more slowly to 2%.

The ECB said: “The Governing Council today decided to raise the three key ECB interest rates by 50 basis points and, based on the substantial upward revision to the inflation outlook, expects to raise them further.

“In particular, the Governing Council judges that interest rates will still have to rise significantly at a steady pace to reach levels that are sufficiently restrictive to ensure a timely return of inflation to the 2% medium-term target.

“Keeping interest rates at restrictive levels will over time reduce inflation by dampening demand and will also guard against the risk of a persistent upward shift in inflation expectations.

“The Governing Council’s future policy rate decisions will continue to be data-dependent and follow a meeting-by-meeting approach.”

ECB officials outlined plans for quantitative tightening by offloading the government debt securities the ECB purchased as stimulus in the past.

The plans envisage a partial halting of reinvestments of maturing bonds under the Asset Purchase Program from March.

“From the beginning of March 2023 onwards, the asset purchase programme (APP) portfolio will decline at a measured and predictable pace, as the Eurosystem will not reinvest all of the principal payments from maturing securities.

“The decline will amount to €15 billion per month on average until the end of the second quarter of 2023 and its subsequent pace will be determined over time.

“At its February meeting the Governing Council will announce the detailed parameters for reducing the APP holdings.

“The Governing Council will regularly reassess the pace of the APP portfolio reduction to ensure it remains consistent with the overall monetary policy strategy and stance, to preserve market functioning, and to maintain firm control over short-term money market conditions.

“By the end of 2023, the Governing Council will also review its operational framework for steering short-term interest rates, which will provide information regarding the endpoint of the balance sheet normalisation process …”