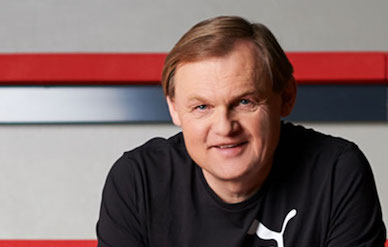 Adidas has hired Puma chief executive Bjørn Gulden as its next CEO as Adidas seeks to move on from a crisis over its partnership with rapper Kanye West, also know as Ye.

Gulden worked at Adidas in the past.

Adidas said on October 25 it was terminating its partnership immediately with Kanye West following a string of offensive and antisemitic remarks from the rapper.

Current Adidas chief Kasper Rorsted will step down on Friday, earlier than expected.

Puma, meanwhile, announced that its chief commercial officer Arne Freundt will become chairman of its management board and CEO of Puma with immediate effect.

“Effective January 1, 2023, Bjørn Gulden is appointed as member of the executive board and CEO of Adidas AG,” said Adidas.

“Kasper Rorsted and the supervisory board mutually agreed that he will step down as CEO and leave the company upon expiry of November 11, 2022.

“Harm Ohlmeyer, chief financial officer of Adidas AG, will lead the company in the interim until December 31, 2022.

“The supervisory board had announced a CEO transition on August 22, 2022.

“Bjørn Gulden looks back at a tenure at Adidas as, amongst others, Senior Vice President of Apparel and Accessories from 1992 to 1999.

“He also holds the position of chairman of the board of Salling Group, Denmark’s largest food retailer.”

Gulden was a professional football and handball player. He played football for FC Nürnberg in the Bundesliga, and for Bryne and Strømsgodset in the Norwegian Premier League, and played handball for Haslum in Norway’s first league.

“We are very pleased to welcome Bjørn Gulden back at Adidas,” said said Thomas Rabe, chairman of the Supervisory Board of Adidas AG.

“As a result, he knows the industry extremely well and draws on a rich network in sport and retail.

“As CEO of Puma, he re-invigorated the brand and led the company to record results.

“The Supervisory Board of Adidas AG is convinced that Bjørn Gulden will head adidas into a new era of strength and is looking very much forward to a successful cooperation.”

Rabe added: “We would like to thank Kasper Rorsted for his major achievements at Adidas.

“He strategically repositioned the company and fast-forwarded its digital transformation.

“In addition, Adidas has strengthened its leadership position in sustainability and increased diversity, equity, and inclusion throughout the company.

“Following the successful divestiture of TaylorMade, CCM Hockey and Reebok the company is now able to focus its efforts on its core brand adidas.

“We wish Kasper Rorsted all the best for his future endeavors.”