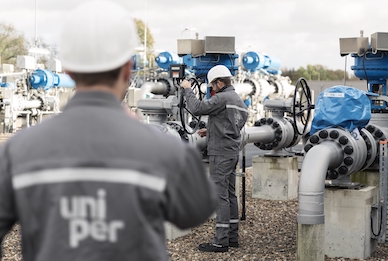 Gas importer Uniper has reported a record €40 billion net loss in the first nine months of this year, the biggest in German corporate history, after Russia stopped its supplies.

Uniper shares have lost more than 90% of their value since the start of the year.

“The IFRS-net loss of around €40 billion contains roughly €10 billion of realized costs for replacement volumes, and roughly €31 billion of anticipated future losses from valuation effects on derivatives and provision built-ups related to the Russian gas curtailments as of September 30, 2022 …” said Uniper, which will soon be nationalised.

“Following very good earnings in the prior-year period, the decline is mainly attributable to the gas business, which is being adversely affected by high replacement costs due to curtailed gas deliveries from Russia between June 14 and September 30, 2022,” said Uniper, which will soon be nationalised.

“This adverse impact was further exacerbated in the third quarter of 2022 by the complete cessation of any gas delivery.

“In order to fulfill its customer contracts, Uniper has been forced to buy gas on the spot market at high prices.

“Volatile and rising prices as well as hedging transactions for future gas deliveries had a positive impact on the gas business.

“The international portfolio was negatively effected by the shortfall in LNG deliveries from the Freeport LNG terminal in the U.S. due to fire damage to the infrastructure there.

“In addition, non-recurrence of extraordinary optimization income due to extremely cold weather in the prior-year period adversely affected the international portfolio negatively.”

Uniper CFO Tiina Tuomela said: “To ensure customers’ supply security, Uniper has for some time been procuring gas at significantly higher prices and, as is well known, has thus recorded considerable losses because the replacement costs of procuring new gas aren’t being passed through to consumers.

“Our half-year numbers already indicated that this has left massive scars in our financial results. Implementing the stabilization package therefore has the highest priority.

“We and the Federal Government are currently finalizing the details of the support measures relating to the suspension of the gas surcharge.

“We are also working intensively to restructure our gas portfolio in order to minimize risks and to end by 2024 the losses resulting from suspended Russian gas deliveries.

“Uniper will play a key role in ensuring Germany’s supply of power and gas for winter 2022/2023 and subsequent years.

“Our focus is therefore on making additional amounts of gas and LNG available to Germany and doing everything we can to move forward with the necessary infrastructure, such as the construction of the country’s first LNG import terminal.”