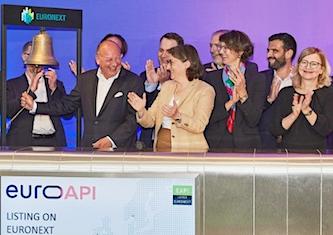 The issue price of EuroAPI shares was set at €12 per share, meaning market capitalisation was €1.1 billion at the opening.

Sanofi will retain 30% of the company and has committed to a two-year lock-up period.

EPIC Bpifrance, acting on behalf of the French State under the French Tech Sovereignty convention, has undertaken to acquire 12% of EuroAPI’s capital and has committed to a two-year lock-up period.

L’Oréal, Sanofi’s largest shareholder, will hold 5% of EuroAPI and has committed to a one-year lock-up period.

The company operates six production sites in Europe and offers around 200 APIs to nearly 530 clients in over 80 countries.

“It aims to reinforce EuroAPI’s status as reference partner for all laboratories in the pharmaceutical and the biotechnology sectors, and to build upon its independence from Sanofi.

“This listing will allow EuroAPI to accelerate its strategy aimed at developing the group’s activities as a CDMO, to reinforce its technological platforms, to leverage its presence in complex and highly differentiated APIs and to guarantee the group’s operational efficiency.

“EuroAPI is convinced that it is today well positioned to capture future growth in the dynamic API market.”

EuroAPI addresses the merchant segment of the API process development and manufacturing market, which was estimated at €72 billion in 2019 and expected to grow at an average rate of 6% to 7% per year until 2024 and a global CDMO (contract development and manufacturing company) market expected to grow at a rate of 7% to 8% per year on average over the same period.

Rotthier added: “By operating as an independent company, EuroAPI will gain flexibility and growth opportunities to reinforce its status as partner of choice for all pharmaceutical and biotech companies.

“We are fully confident in our ability to unlock further value for all our stakeholders and look forward to writing this new chapter alongside Sanofi, which will remain a long-term strategic partner, BPI France and L’Oréal, and to serve our clients in Europe and globally.”