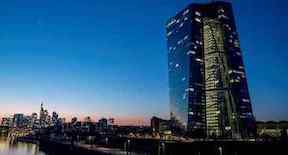 The European Central Bank (ECB) has accelerated the reduction in its bond-buying monetary stimulus as inflation rises amid the war in Ukraine.

The central bank said it could stop adding to its existing €4.6 trillion bond portfolio in the third quarter “if the incoming data support the expectation that the medium-term inflation outlook will not weaken even after the end of our net asset purchases.”

It said the separate €1.85 trillion emergency bond-buying scheme — the pandemic emergency purchase programme (PEPP) — will stop net purchases as planned at the end of March.

The ECB gave itself flexibility on the timing of any interest rate rise this year.

“Any adjustments to the key ECB interest rates will take place some time after the end of the Governing Council’s net purchases under the APP and will be gradual,” said the bank.

“The path for the key ECB interest rates will continue to be determined by the Governing Council’s forward guidance and by its strategic commitment to stabilise inflation at 2% over the medium term.

“Accordingly, the Governing Council expects the key ECB interest rates to remain at their present levels until it sees inflation reaching 2% well ahead of the end of its projection horizon and durably for the rest of the projection horizon, and it judges that realised progress in underlying inflation is sufficiently advanced to be consistent with inflation stabilising at 2% over the medium term.”

ECB President Christine Lagarde told a news conference: “The Russia-Ukraine war will have a material impact on economic activity and inflation through higher energy and commodity prices, the disruption of international commerce and weaker confidence.”

Pietro Baffico, European economist at Abrdn, said: “The ECB surprised on the hawkish side today, as high and rising inflation outweighs the negative economic shock from Russia’s invasion in Ukraine.

“The pace of net purchases under the APP program is reduced to EUR 20 billion by June, with the aim to conclude them in the third quarter.

“The Governing Council still retains flexibility, as it stressed the recalibration in the third quarter will be data-dependent.

“At the same time, the ECB is still not pre-committing on rate hikes, and changed its forward guidance, adding that any rates hikes will take place ‘some time’ after the end of net purchases – instead of ‘shortly’- and they would be ‘gradual’.

“The updated staff forecasts cut growth and raised inflation, but interestingly still have the all-important 2024 inflation forecast just below the 2% target, implying the ECB’s conditions for lift-off is not yet met, although this could as well change in the coming months.

“More volatility cannot be excluded in the coming months, as the ECB keeps its options open, and its data-dependent approach could lead to further adjustments of its policies in either direction.”

Quilter Investors portfolio manager Paul Craig: “Given the ECB has been so far behind the curve when it comes to tightening policy, the last thing it would have wanted to be contending with was a further inflationary shock.

“This is precisely what has happened with the Russian invasion of Ukraine, and inflation in the Eurozone is now forecast to be higher for longer.

“In contrast to the Fed and the Bank of England, which have either increased rates or signalled that they will hike in the very near future, the ECB has so far been holding fast, though it was expected that a hawkish move would be signalled at this meeting.

“The balancing act faced by the ECB is an extremely challenging one. On the one hand, the bloc is faced with an inflationary shock that requires quick and decisive action.

“On the other, the attempted Russian invasion of Ukraine has cast a shadow of uncertainty over Europe that could end with weak demand and recession.

“So the ECB has opted for the path of least resistance, and will take a middle ground by announcing a gradual reduction in asset purchases while avoiding a firm commitment on the eventual end date.

“This provides them with a path to policy normalisation while at the same time retaining some flexibility to respond to a changing macroeconomic landscape.”