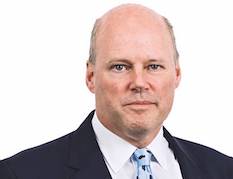 Hester is set join the board of Nordea at the next annual meeting on March 24 and become chairman on October 1.

“Torbjörn Magnusson is proposed to continue as chair of the board until 30 September 2022 and thereafter as ordinary member of the board.”

Chair of the nomination board Ricard Wennerklint said: “Taking into account Stephen Hester’s extensive experience within banking and the insurance industry internationally as well as in the Nordics, we are very excited about the potential that he has to offer Nordea.

“In preparing its proposal, the nomination board has also consulted the CEO and president Frank Vang-Jensen who together with his team has led Nordea to a great business performance.”

Magnusson said: “Frank Vang-Jensen and his team are doing an excellent job in continuously improving Nordea’s performance and its position as the leading bank in the Nordics.

“I’m committed to continue as the chair of the board for the first half of 2022 and to a good handover to Stephen Hester.”

Nordea said Hester spent 17 years as chief executive of three FTSE100 companies including Royal Bank of Scotland (2008-13) and RSA Insurance (2014-21), the owner of Trygg Hansa in Sweden and Codan in Denmark and Norway.

“He previously had 22 years of financial services experience at Credit Suisse and Abbey National,” said Nordea.

“His leadership roles have encompassed retail, commercial and investment banking at a global scale as well as insurance and asset/wealth management.

“Hester (61) is a UK citizen, and having concluded his executive career earlier in 2021 is now focused on international board work including as chairman of easyJet plc, the European airline.”

Hester said: “It is a great privilege to be nominated to take up the position of Nordea Chair later in the year.

“The bank in my eyes is the best positioned to succeed of all Nordic banks and I’m fully supportive of the team and strategy led by Frank Vang-Jensen that is executing so well.

“Nordic financial services have been a part of my career in many different roles, especially since 2014.

“I love the region and feel excited about working as part of the board to further develop this iconic Nordic company.”

Nordea added: “Stephen Hester is independent from Nordea Bank Abp and its significant shareholders in accordance with the Finnish Corporate Governance Code.

“He does not currently own any shares in Nordea Bank Abp.

“The relevant authority approval for Stephen Hester is pending.”