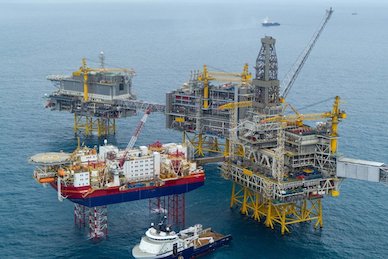 Norway’s Aker BP is set to become Europe’s largest independent oil producer after agreeing a roughly $14 billion shares and cash deal to take over — via a statutory merger — the oil and gas related activities of Swedish rival Lundin Energy.

Aker BP will pay around $2.2 billon in cash and about $11.7 billion of shares to buy the main activities of Lundin in a deal that would create a major rival to state-controlled giant Equinor in Norway.

The companies said the deal has the potential to realise operational synergies of up to $200 million per year and offers a resource base of 2.7 billion barrels of oil equivalents “with significant growth potential.”

Closing of the deal, which depends on regulatory and shareholder approvals, is expected in the second quarter of 2022.

Lundin Energy chairman Ian Lundin said: “Creating long term value for shareholders has been at the core of this business for 20 years since inception and this combination of Lundin Energy and AkerBP is a unique opportunity to create a future proof independent E&P company, exposing shareholders to a business with significant scale, production growth and strong free cashflow into the next decade.

“Coupled with this is a world class asset base which will have one of the lowest cost and lowest CO2 emissions per barrel in our industry.

“This combination proposal with AkerBP merges our two great businesses together, builds on our individual strengths, and creates a company which will prosper through the energy transition and continue to deliver strong dividends into the next decade.

“For Lundin Energy shareholders, this will deliver a significant cash consideration and the opportunity to be a shareholder in the leading European E&P company.

“The independent members of the board of directors have also recommended that all shareholders vote in favour of this transaction.”

Øyvind Eriksen, CEO of Aker ASA and chairman of Aker BP, said: “In 2016 we created Aker BP together with BP when we combined Det norske and BP Norge.

“We have always admired Lundin Energy both as a partner and as a highly capable operator on the Norwegian Continental Shelf with world class assets, like their 20 per cent participating interest in Johan Sverdrup.

“Already when we created Aker BP, a subsequent acquisition of Lundin Energy was a vision shared between BP and Aker.

“Today the vision has become a reality. We are seizing an opportunity that will make a difference for both Aker and Norway for decades to come.

“The collaboration with BP has been outstanding from day one. We are grateful for their significant contribution to the success of Aker BP.

“Our mutual strategic interests have also provided opportunities to expand our strong relationship into new areas, including digitalization, offshore wind, and oil services.

“Now we are welcoming Lundin (through Nemesia S.á.r.l) as fellow shareholders in Aker BP …

“We are looking forward to a long-term collaboration with both BP and Lundin based on a shared ambition of developing and positioning the Enlarged Aker BP as the E&P company of the future.”

BP CEO Bernard Looney said: “We welcome and support this proposed acquisition, which will strengthen and significantly enhance the long-term future of Aker BP and our continuing relationship with Aker.

“The combination of Aker BP and Lundin Energy’s Norwegian oil and gas business will create a world-scale independent oil and gas company with a leading position in very high-quality, resilient resources with best-in-class CO2 emissions intensity.

“As long-term investors in Aker BP, we are excited about the prospects for the new enlarged company.”