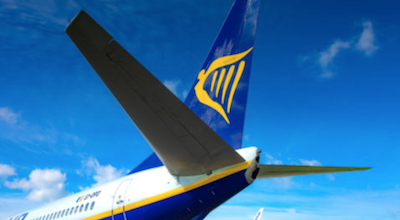 Dublin-based Ryanair said on Monday it is considering delisting from the London Stock Exchange in the coming months due to a fall in trading volumes there — dealing another blow to the status of London and the UK after Brexit.

“Trading on the London Stock Exchange (LSE) as a percentage of overall trading volume in Ryanair’s ordinary shares has reduced materially during 2021,” said Ryanair in its half-year report.

“The migration away from the LSE is consistent with a general trend for trading in shares of EU corporates post Brexit and is, potentially, more acute for Ryanair as a result of the long-standing prohibition on non-EU citizens purchasing Ryanair’s ordinary shares being extended to UK nationals following Brexit.

“The board of Ryanair is now considering the merits of retaining the standard listing on the LSE.

“Ryanair has a primary listing on the regulated market of Euronext Dublin, which offers shareholders the highest standard of protection, including compliance with the UK Corporate Governance Code, and its ADRs are listed on NASDAQ.”

Ryanair CEO Michael O’Leary told a conference call: “I think we will probably delist sometime in the next six months.”

O’Leary added that the European Commission “wants us to be seen to be taking action.”

The news came as Ryanair reported its first quarterly profit since before Covid-19 — but downgraded its annual forecast to a loss as it prepares to slash winter prices.

Ryanair made a net profit of €225 million for the three months to the end of September, marking its first quarterly profit since the final three months of 2019.

But the airline warned it expected a loss of between €100 million and €200 million for the financial year that ends on March 31, 2022.

“The outlook for pricing and yields for the winter of FY22 will be challenging,” said Ryanair.

“This, coupled with rising costs for the small unhedged balance of our fuel needs, means that visibility for the remainder of FY22 is very limited.

“It is therefore difficult to provide meaningful FY22 guidance.

“This outturn will be crucially dependent on the continued rollout of vaccines and no adverse Covid-19 developments.”