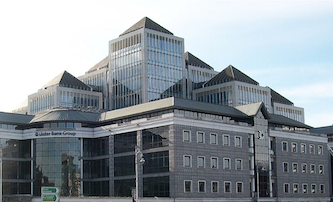 NatWest Group — formerly known as RBS — said on Friday it intends to begin a phased withdrawal for its Ulster Bank business from the Republic of Ireland over the coming years “that will be managed in an orderly and considered manner.”

Ulster Bank has operated in Ireland for more than 160 years and is the country’s third largest lender with a €20 billion loan book and about 2,800 staff.

NatWest said it will try to keep job losses to a minimum. Ulster Bank’s banking business in Northern Ireland is unaffected.

NatWest Group said it concluded that “despite the significant progress that has been made in recent years, Ulster Bank in the Republic of Ireland will not be in a position to achieve an acceptable level of sustainable returns over its planning horizon.”

As part of the withdrawal, NatWest said a non-binding Memorandum of Understanding (MoU) with Allied Irish Banks has been agreed for the sale of a €4 billion portfolio of performing commercial loans, “and the transfer of the colleagues wholly or mainly assigned to this loan book.”

NatWest Group said it is also in early discussions with Permanent TSB Group Holdings among “other strategic banking counterparties” about their potential interest in buying “certain retail and SME assets, liabilities and operations.

“We expect NWG’s withdrawal from the Republic of Ireland to be capital accretive over the multi-year process,” said the group.

NatWest Group CEO Alison Rose said: “In recent years, our strategy for Ulster Bank in the Republic of Ireland has been to improve returns by growing the business, reducing costs and resolving legacy issues …

“Following an extensive review and despite the progress that has been made, it has become clear Ulster Bank will not be able to generate sustainable long terms returns for our shareholders.

“As a result, we are to begin a phased withdrawal from the Republic of Ireland over the coming years which will be undertaken with careful consideration of the impact on customers and our colleagues.”

Irish Finance Minister Paschal Donohoe said on Friday the banking landscape in Ireland would be poorer as a result of NatWest’s decision.

“I won’t say the Irish government welcomes this decision, they do not,” said NatWest chairman Howard Davies.

“But it is supportive of the plans to dispose parts of the business to AIB and the discussions we’re having with Permanent TSB.”

Donohoe said: “The decision by NatWest, the parent of Ulster Bank, to exit the Irish market is a very significant event.

“Our thoughts too are with the Ulster Bank staff as they learn of the closure of the bank here in Ireland.

“However, I welcome the reference made this morning to the two other Irish banks, PTSB and AIB, who are engaging with NatWest regarding the future of Ulster Bank’s SME, mortgage, retail and commercial loan books, as well as the current and deposit accounts held by the bank.

“While this is positive news and indicates the potential further development of already well established Irish banks, there is still much work to be done over the coming months …

“Reassurance is also given to customers of Ulster Bank that robust consumer protections are in place in the event of the bank withdrawing from the Irish market, including the Central Bank’s codes of conduct and that the terms of any contract currently in place with Ulster Bank remains in place into the future.

“I also welcome the announcement regarding Ulster Bank staff which outlines that some staff will transfer to AIB in line with the MoU that has been agreed with that bank.

“The commitment to engage with staff to minimise the impact on them is also to be welcomed.

“I expect that Ulster Bank will fully engage with staff in an open and transparent manner as the process moves forward.

“The Irish banking landscape will be poorer for the loss of Ulster Bank after all these years but we will focus now on the future and what can be done to support and strengthen a competitive and stable Irish banking system for the future.”

Ulster Bank’s chief executive in Ireland, Jane Howard, said that no branches will close this year.

“There’s never a good time to deliver news like this and I understand that it’s extremely disappointing news for both customers and colleagues,” Howard told RTE Morning Ireland.

“But now that the decision has been made, my focus and our focus will be on making sure that we complete this phased withdrawal over a number of years, in an orderly fashion, so that we do a good job for both customers and colleagues.

“What’s really important for today is there is no change right now, we’re continuing to offer a banking service, and no branches will be closing this year.

“(Customers) don’t need to take any action and we’ll be starting to communicate with our customers today.”