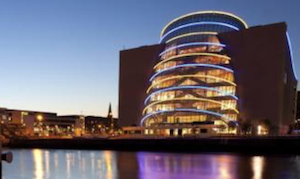 Ireland’s GDP fell by 6.1% quarter-on-quarter from April to June this year — the largest quarterly fall on record.

However, the GDP decline was not as severe as in other advanced economies due to the resilience of Ireland’s exports.

Finance Minister Paschal Donohoe said: “Today’s figures show the largest quarterly decline in GDP on record, with the second quarter fall of 6.1 per cent surpassing the 4.7 per cent decline recorded in the fourth quarter of 2008.

“However, the hit was not as severe as many of our trading partners, for instance the UK, Eurozone and the US where GDP declined by over 20, 12 and 9 per cent respectively in the same period.

“Overall the numbers are broadly as expected based on dataflow on the second quarter released over the course of the summer.

“They very much highlight the dual economic impact of the pandemic with net exports positively contributing to GDP in year-on-year terms on the back of robust growth in pharma exports, while the domestic economy suffered a severe hit.

“Despite the severity of the national lockdown, a large portion of manufacturers continued to trade and this is reflected in our export numbers.

“However many of our jobs-rich domestic sectors were temporarily closed giving rise to the large contraction in domestic demand seen today.

“Looking forward, a recovery in GDP clearly occurred in the third quarter.

“Retail sales in July were almost 5 per cent above the pre-pandemic level with a range of ultra-high frequency indicators, which will be published by the Department later today, pointing to a continuation of this trend in August, albeit at a more modest rate of growth.

“Similarly, in the labour market, the numbers of persons on the pandemic unemployment payment has fallen by over 60 per cent from a peak of 600,000 in early May, with large declines seen throughout July and early August.

“My department will be producing a new set of forecasts in the coming weeks in the run-up to the Budget.

“The policy response to the Covid-19 crisis has been swift and forceful.

“The Government has acted to cushion, in as much as possible, the contraction in private sector demand.

“Measures to support the economy have looked to protect household incomes and to help firms to re-open and to bridge-the-gap for those still affected by restrictions.

“This policy response is possible as a result of the careful management of the economy and the public finances in recent years which means that we entered this period of uncertainty from a position of strength.

“The Government’s plan for further protecting our citizens’ health and that of the economy will be set out in the coming weeks, firstly in the form of a comprehensive plan on living with Covid, quickly followed by the Budget and an economic recovery plan.”