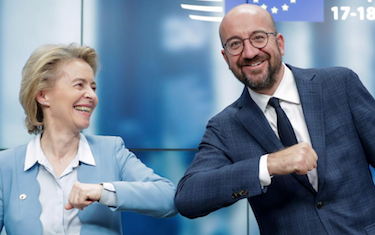 European Union leaders finally agreed a stimulus package worth €750 billion early on Tuesday — with the money to come from bonds sold on behalf of the EU as a whole for the first time.

The European Commission will borrow by selling bonds on the capital markets — a new feature in EU policy making — and grant or lend the money to countries most in need of stimulus.

EU leaders hope the €750 billion and its associated €1.1 trillion 2021-2027 budget will help lift Europe out of recession after the coronavirus outbreak shut down economies.

The joint EU issuance of collective debt securities is a major step towards further economic integration in the bloc, with some analysts even calling the deal Europe’s “Hamilton moment” in reference to Alexander Hamilton’s decision to federalise debts of US states in 1790.

The plan now faces a potentially difficult passage through the European Parliament and it must be ratified by all EU states.

“We have come up with a response to the biggest crisis the EU has faced.”

Almost a third of the recovery fund is earmarked for fighting climate change.

Merkel added: “Europe has shown it is able to break new ground in a special situation.

‘‘A very special construct of 27 countries of different backgrounds is actually able to act together, and it has proven it.”