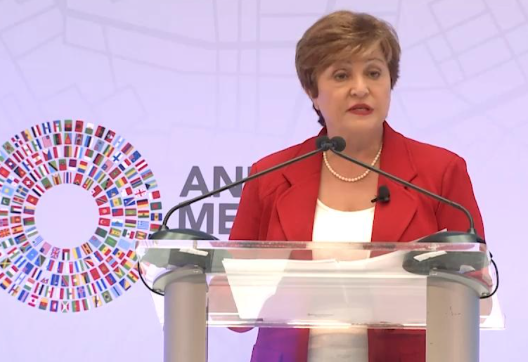 Governments around the world have spent $10 trillion in fiscal actions to respond to the economic crisis caused by the coronavirus pandemic, the head of the International Monetary Fund (IMF) wrote on Thursday.

“Globally, fiscal actions so far amount to about $10 trillion,” wrote Georgieva in an IMF blog.

“But given the severity of the crisis, significant further efforts are essential.

“This includes taking the measures needed to avoid a scarring of the economy, including from job losses and higher inequality.

“It is clear that increasing access to opportunities is now more critical than ever if we are to avoid persistent increases in inequality.”

Georgieva added: “This calamity could lead to a significant rise in income inequality.

“And it could jeopardize development gains, from educational attainment to poverty reduction.

“New estimates suggest that up to 100 million people worldwide could be pushed into extreme poverty, erasing all gains made in poverty reduction in the past three years …

“COVID-19 has triggered a mass migration from analog to digital.

“But not everyone has seen the benefits; and the growing digital divide is set to become one of the legacies of the crisis.

“What can policymakers do?

“A key priority must be to broaden the access of low-income households and small businesses to financial products, which will allow households to smooth consumption in the face of shocks and businesses to undertake productive investments.

“Reaching the most vulnerable can be challenging in developing economies, where nearly 70 percent of employment is informal.

“But this is where fintech opportunities abound.

“Think of the fact that about two-thirds of all unbanked adults (1.1 billion people) have a mobile phone, and one-quarter have access to the internet.

“Moving routine cash payments by governments into accounts could reduce the number of unbanked adults by 100 million globally, and even bigger opportunities exist in the private sector …”