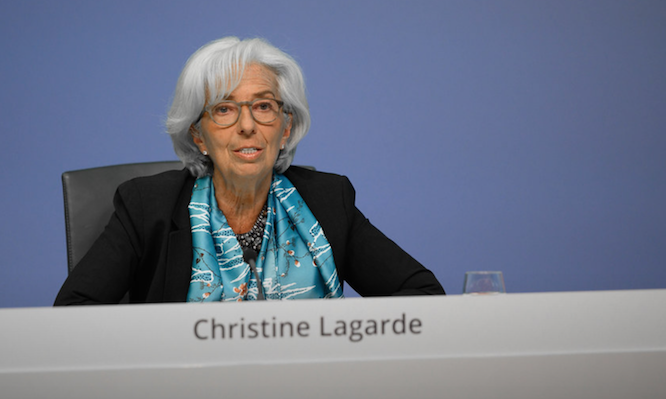 The European Central Bank on Thursday announced a bigger-than-expected expansion of its stimulus package to support an economy plunged into recession by the coronavirus pandemic.

The ECB said it would raise its bond purchases by €600 billion to €1.35 trillion and those purchases would run at least until the end of June 2021, six months longer than originally planned.

The move means the ECB is on track to buy more than €1.7 trillion of assets this year — a record high.

“There has been an abrupt drop in economic activity as a result of the coronavirus pandemic and the measures taken to contain it.”

The ECB revised downward its baseline scenario for euro zone output this year to a contraction of 8.7% — down drastically from the 0.8% rise it had forecast in March.

On the bond purchases, the ECB said: “The envelope for the pandemic emergency purchase programme (PEPP) will be increased by €600 billion to a total of €1,350 billion.

“In response to the pandemic-related downward revision to inflation over the projection horizon, the PEPP expansion will further ease the general monetary policy stance, supporting funding conditions in the real economy, especially for businesses and households.

“The purchases will continue to be conducted in a flexible manner over time, across asset classes and among jurisdictions.

“The horizon for net purchases under the PEPP will be extended to at least the end of June 2021.

“In any case, the Governing Council will conduct net asset purchases under the PEPP until it judges thatthe coronavirus crisis phase is over …

“The maturing principal payments from securities purchased under the PEPP will be reinvested until at least the end of 2022.

“In any case, the future roll-off of the PEPP portfolio will be managed to avoid interference with the appropriate monetary stance.”

Paul Diggle, senior economist at Aberdeen Standard Investments, said of the ECB move: “Taken together with recent fiscal announcements or proposals for additional fiscal spending, this reinforces an emerging narrative in markets that the European monetary and fiscal response is stepping up to the plate, becoming sizeable and co-ordinated.

“Those forecasts are actually slightly above our own, as we see the disinflationary forces as even more embedded in Europe than the ECB itself does.

“But either way, with inflation still well below target even by 2022, we wouldn’t rule out further easing from the ECB.

“Indeed, Christine Lagarde at one point held out the prospect of another reassessment of the PEPP envelope come the September macro forecast update.

“Additional ECB easing  comes against a backdrop of an improving European fiscal policy response as well.

“The average structural loosening of individual Eurozone member states is now around 4% of GDP, with Germany doing the most including a EUR130 billion supplementary budget agreed yesterday.

“And at the supra-national level, fiscal measures agreed already add up to an additional 4% of Eurozone GDP, with the EU Recovery Fund proposals potentially adding another 5% of EU GDP of stimulus.

“The upshot is that the monetary and fiscal policy mix in Europe is finally starting to look up to the job, at the same time as the high-frequency data suggests an upward inflection point in economic activity is underway.

“High-frequency measures of European economic activity are now inflecting upwards, and a period of rapid growth lies ahead.

“We still think that the rebound will not make up for all of the initial contraction meaning that there will be a permanent output loss relative to the pre-crisis trend, and we remain worried about second wave risks.

“Nevertheless, the pieces may be falling into place for a period of better performance in the European economy and markets.”

Hinesh Patel, portfolio manager at Quilter Investors, said: “While it is no surprise to see interest rates left untouched, we were expecting less of an increase in the pandemic bond buying programme given economies across Europe are beginning to reopen and the worst of the crisis appears to be in the rear-view mirror.

“Needless to say this should be another positive for risk assets, at a time when equities in particular have already rallied strongly from their lows in March.

“Investors will be watching Europe with interest going forward as valuations remain on the cheaper side compared to other regions and remains under-owned by international investors.

“If Christine Lagarde continues to placate big businesses’ borrowing costs like this, we should see a positive return environment for investors as the economy gets going again.”