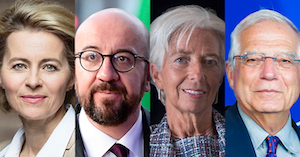 European leaders have agreed on who should fill the top jobs for its main institutions after a marathon summit.

Three days of summit negotiations ended with a deal that now must be approved by the European Parliament, where it may face a degree of resistance.

The fifth prominent EU role to be decided on is the president of the European Parliament, with lawmakers due to choose that person in Strasbourg on Wednesday.

Donald Tusk, current President of the European Council, said in a statement: “First and foremost, we have chosen two women and two men for the four key positions.

“A perfect gender balance. I am really happy about it.

“After all Europe is a woman. I think that it was worth waiting for such an outcome.

“It will now be for the European Parliament to consider Ursula von der Leyen for Commission President.

“If elected, she will be the first woman to lead the European Commission.

“Charles Michel will, with his experience as Belgian Prime Minister, be ideal for finding consensus and building unity among Member States.

“Josep Borrell will, as Foreign Minister and former President of the European Parliament, be a strong representative and defender of the European Union’s interests and values in the world.

“Christine Lagarde will, with her international background and standing as current Managing Director of the International Monetary Fund, be a perfect President of the European Central Bank.

“In addition, the European Council took note of Ursula von der Leyen’s intentions to nominate Frans Timmermans and Margrethe Vestager as the highest-ranking Vice-Presidents of the Commission.

“We also expect Ursula von der Leyen to ensure an appropriate geographical balance in the team of Vice-Presidents.”

Lagarde tweeted: “I am honored to have been nominated for the ECB Presidency. In light of this, and in consultation with the Ethics Committee of the IMF Executive Board, I have decided to temporarily relinquish my responsibilities as IMF Managing Director during the nomination period.”

Alicia Levine, chief strategist at BNY Mellon Investment, told Bloomberg the nomination of Lagarde’s — who is not an economist — is “… a little puzzling because she’s not known as one of the leading economic minds out there.”