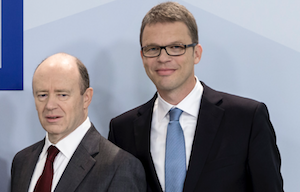 He succeeds John Cryan, 57, who will leave the bank at the end of this month.

Sewing said immediately that Deutsche Bank will “thoroughly analyse” how it wants to position its corporate & investment bank “in a difficult market environment.”

He said the bank will be “pulling back from those areas where we are not sufficiently profitable.”

Since joining Deutsche Bank in 1989 as an apprentice, Sewing has worked for the company in Frankfurt, Hamburg, London, Singapore, Tokyo and Toronto.

In a message to colleagues, Sewing wrote: “Naturally you will have questions about what our strategy will be going forward.

“Like other banks, all our businesses face dramatic changes in our industry – here we are not alone.

“In response to this, we have restructured our three business divisions significantly in recent years: a few weeks ago, we successfully listed our asset manager DWS on the Frankfurt Stock Exchange despite unfavourable market conditions.

“The integration of our private & commercial bank in Germany with Postbank is making good progress, and we expect to merge the two legal entities in the second quarter of 2018 – seven months after the plan to integrate them was announced.

“In our corporate & investment bank we are also doing well in important business areas globally.

“We have been able to recover market share in key areas.

“But we also know that we’ll have to further adapt our revenue, cost and capital structure.

“Therefore we’ll thoroughly analyse how we want to position this pillar of our bank in a difficult market environment.

“The priority is to leverage our strengths and to allocate our investments accordingly.

“And at the same time we will look to free up capacity for growth by pulling back from those areas where we are not sufficiently profitable.”

Analysts at Citigroup wrote: “We struggle to see how replacing Mr. Cryan with Mr. Sewing will result in a change of fortune for the bank.

“Compared to some of the external candidates proposed in the press over the past week, his appointment could be viewed as underwhelming.”

Other analysts and investors are looking for clarity on where Deutsche Bank’s growth will come from.

“What matters, and in our view Deutsche Bank has been missing for several years now, is a clearly defined strategy,” said JP Morgan analyst Kian Abouhossein.

“Deutsche Bank’s problem is not the CEO, as speculated by the press, but different stakeholders with different interests, with little evidence of commitment to changing the organization in the interests of the owners: shareholders and creditors.”

Paul Achleitner, chairman of the Deutsche Bank supervisory board, said: “In his more than 25 years at Deutsche Bank Christian Sewing has proven himself a strong and disciplined leader.

“The supervisory board is convinced that he and his team will be able to successfully lead Deutsche Bank into a new era.

“We trust in the great ability of this bank and its many talents.”