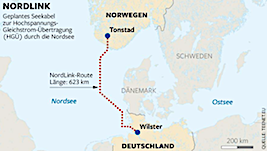 The European Investment Bank (EIB) said it will provide a €350 million loan to TenneT Holding B.V. to finance “NordLink”, the first interconnection between Germany and Norway across the North Sea.

The High Voltage Direct Current (HVDC) link will have a capacity of 1,400 MW and a total route length of 624 km.

“It will improve diversification and security of supply and enhancing electricity market integration in both countries, and more widely between Northwest Europe and Scandinavian countries,” said the EIB.

“It is also designated as a Project of Common Interest in the Priority Corridor Northern Seas Offshore Grid.”

Ambroise Fayolle, EIB vice president, responsible for Germany, commented: “Security of electricity supply and effective use of renewable energy will be improved significantly.

“In the medium term, it will help ease constraints and allow the evacuation of surplus renewable generation from Germany to Scandinavia.

“For us, the EU Bank, forward-looking investments in modern energy infrastructure are key to reach our ambitious climate goals.”

TenneT CFO Otto Jager said: “With over €1.5 billion of total funds committed, the EIB has proven to be an important and reliable financing partner for our green onshore and offshore high voltage transmission projects.

“The support of the EIB for this project shows the importance of investments like NordLink, integrating European electricity markets.

“With this subsea interconnector we can exchange energy between two complementary energy systems.

“There’s the increasing amount of wind and solar power produced in Germany on the one hand and the production of energy from hydroelectric power in Norway on the other.

“NordLink is a connection of European pertinence that benefits all countries, especially North-west Europe.”

The NordLink project will be realised by the Norwegian transmission system operator Statnett and DC Nordseekabel GmbH & Co. KG, each with 50% ownership.

DC Nordseekabel is responsible for the construction of the German part of the project, including permits.