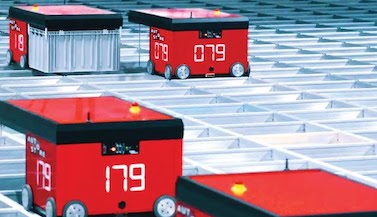 SoftBank-backed Norwegian warehouse robotics group AutoStore announced it will seek to raise $315 million via an initial public offering (IPO) on the Oslo Bourse next month that could value the firm at up to $12 billion.

SoftBank bought a 40% stake in the Norwegian company for $2.8 billion in April, valuing AutoStore at about $7 billion. Other investors include US private equity firm Thomas H. Lee Partners and Swedish private equity group EQT.

“Following an internal reorganization prior to the IPO, AutoStore will be directly or indirectly owned by funds and/companies owned, managed or advised by Thomas H. Lee Partners, SoftBank Group Corp. and EQT, as well as employees of the AutoStore group and certain other minority shareholders,” said AutoStore.

The company said it did not consider any other venue other than Oslo for listing.

“We are a Norwegian company … it was only natural for us to list in Oslo,” CEO Karl Johan Lier told Reuters.

AutoStore has 20,000 robots in more than 35 countries that automate warehouse operations.

“We expect that we will continue to grow strongly in Europe, we will grow even stronger in North America and the APAC region going forward,” Lier said.

“As the only scaled and commercially available provider within our segment, we are ideally suited to further capitalize on rapidly increasing global investments in e-commerce and automation.

“Our listing on the Oslo Børs will be the first step in what we expect to be a long and exciting journey as a public company and we look forward to celebrating this achievement with our employees, customers, and investors.”